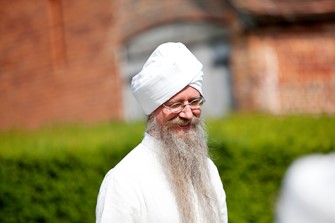 Guru Dharam Singh Khalsa BAcC RCHM: has taught Kundalini yoga since 1979. He founded the Lotus Healing Centre, a multi disciplinary holistic facility, in London in 1989 and served as the Vice Principal of the London Academy of Oriental Medicine until 1997. As a Keynote speaker on matters of health, vitality, emotional intelligence for Association of Chief Executives in the UK, 2002-2005, he served as an educator to the business and corporate community.

Since 1980 Guru Dharam has developed a practical system of Yogic Therapy, applying the science of Kundalini, mantra and visualization, helping to empower many thousands of people toward a healthier and happier life.

As Director of the Kundalini Medicine initiative Guru Dharam has developed the International Kundalini Yoga Therapy Training as a safe, effective and therapeutic complement to the mechanics of western medical practice.

Guru Dharam is recognised as a one of the few Master Teachers taught directly by Yogi Bhajan and travels the world as such, sharing classes and workshops as well as maintaining a consultative therapeutic practice in London, New York and Sweden, where he is now resident.